Just last week when a BBC journalist, Allan Kasujja asked president Museveni about the deteriorated relationship between Uganda and Rwanda, he got one of the classic Museveni responses to the media and the public – pretending to do something good when actually he is doing something bad! It […] 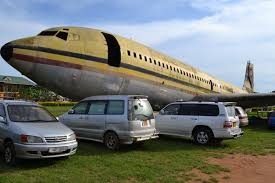 Museveni’s trolls tweeting against Rwandair shows how desperate they, like their boss, are!

Recently, due to bad weather, Rwandair redirected a flight to Entebbe. Immediately, the anti-Rwanda lobby comprised of RNC and Museveni minions launched a smear campaign against Rwanda. Their narrative was that ‘Mother Nature’ had humbled Rwanda into seeking Ugandan help. This follows a tweet from Rwandair informing their […]

In less than a week, President Museveni’s first son, Lt Gen Muhoozi Kaineruga, has been chest thumping on twitter, sending messages which in established protocol are the prerogative of the Head of State. In one tweet he said ” Uganda strong! I never used to believe it but […]

Have Kayumba and Museveni decided to make Ben Rutabana’s wife a widow and his children orphans?

One of Kayumba Nyamwasa’s traits is nepotism and it is a trait he shares with president Museveni. The terrorist leader of RNC and the Ugandan leader have been employing this trait in their schemes whether in leadership, business, or in other undertakings. Nepotistic practices are their trademark. Many […]

Members of Museveni militia to destabilize Rwanda appear before court

The past week saw 25 Museveni sponsored militias parade in a military courtroom in Kigali. These were Museveni’s Rwanda National Congress militias and P5 associates captured in East Congo after they were defeated on the battlefield. They were extradited to face trial in Rwanda for their terrorist enterprise. […]

For almost 10 years now, president Museveni has been relying on false intelligence to harm Rwanda by recruiting Rwandans criminals to bolster these plans. In addition to gathering all those Rwandan criminals and rejects, he recently brought on board a UN designated terrorist organization: the FDLR genocidaires. Museveni’s […]

Gideon Rugali Rukundo, an NRM fanatic who harbors political ambition to be the Ndorwa MP, is constantly on social media engaged in a smear campaign against Rwanda. He is listed as one of the Rwanda National Congress (RNC) executive committee members in Uganda, along with Sulah Wakabiligi Nuwamanya […]

Museveni is a vindictive man. But this vindictiveness drives him into repeated defeats. Kisangani I, II, and III, are good examples. Museveni’s anger is also captured by what he once told the late Julius Nyerere. When Mwalimu Julius Nyerere asked him why he was against the “Young RPF […]